Relief for U.S. citizen or Green Card holders living abroad was conspicuously absent in the new U.S. tax law — but American Citizens Abroad (ACA) is calling upon Congress to hold hearings in 2018 to address what many see as unfair tax burdens for U.S. expats.

After the new Republican Party-backed tax law offered no measures of much-hoped-for tax relief for overseas residents, ACA and other business groups representing expat taxpayers will continue to press for changes before a congressional committee, ACA said. These groups include Republicans Overseas, Democrats Abroad, Americans for Tax Reform, the Heritage Foundation, and different American Chambers of Commerce overseas.

“Now is the time to lay on the table every aspect of this subject,” said Marylouise Serrato, ACA’s executive director. “The background, the workings of existing law, the numbers, the real-life stories, all need to be aired, and now’s the time to do it. Then, based on all the information, everyone can come forward with their detailed proposals.”

Before the bill was signed into law, Ways and Means Committee Republicans said they were discussing measures to end taxes on foreign earned income. Representative George Holding (R., N.C.) previously publicly advocated ending taxes on foreign-earned income and reportedly said he was optimistic the proposal would be part of the bill before it was signed into law. Holding noted how multinational companies are often reluctant to hire U.S. citizens because of the extra costs to do so. Republicans also discussed repealing the Foreign Account Tax Compliance Act (FACTA) last year as part of their part platform. However, both of these provisions were missing from the recently passed tax law.

“The details of this approach are intended as a starting point for everyone’s thinking,” said Charles Bruce, ACA’s Legal Counsel. “It’s not a legislative proposal, as such, but it will help people who want
to dive into the subject.”

The move to a residency-based taxation system for expats would reflect tax codes in other countries in the “industrialized world,” Serrato said. “Individuals should not be left tied to an arcane
and burdensome tax system based on 19th century Civil War era tax policy,” Serrato said. 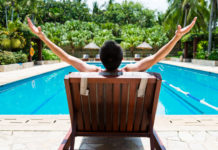 New Relief Procedures for “Accidental Americans” planning to give up U.S. citizenship

ABOUT US
We are a global network of experienced U.S. CPAs and Enrolled Agents working specifically with Americans (and green card holders) living and working abroad.